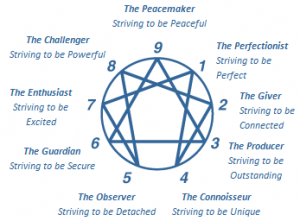 The Enneagram is a dynamic personality system that describes nine distinct and fundamentally different patterns of thinking, feeling and behaving.

Each of these nine patterns is based on an explicit set of perceptual filters that determine our worldview. Underneath each of the nine patterns is a basic proposition or belief about what one needs in life for survival and satisfaction.

The word “ennea” is Greek for nine and “gram” means model or figure. Hence, the Enneagram is a diagram or star with nine points representing the nine personality patterns.

Validation of the Enneagram
Based on the Enneagram work of Don Riso and Russ Hudson of The Enneagram Institute (New York), independent researchers at SHL (UK), lead by Prof. David Bartram, found that the nine personality types of the Enneagram are “real and objective,” and that they stand on a par psychometrically with the Myers-Briggs system, the Big Five, and other well-known, accepted psychological systems.

“In short, the Enneagram has now been “scientifically supported,” according to Dr. Bartram. “The research suggests that the nine Enneagram types, as described by Don Riso and Russ Hudson of The Enneagram Institute, do have validity as real and objective indicators of personality,” continued Bartram. Therefore, businesses and other kinds of users of the Enneagram typology can be reassured about its objective value.

To find out more about how the Enneagram can help your business, contact me direct on 1300 854 180 or jan@janterkelsen.com.